Houston Wooden Pallets usually fall into three categories: stringer pallet, block pallet and perimeter base pallet. The stringer pallet employs a design whereby parallel pieces of timber referred to as stringers, are used. In this design three stringers are put in the frame. The top deck boards are then fixed to the structure to finalize the pallet. On the other hand, block or as in other places Manoj pallets, use both parallel and perpendicular structures altogether in its design.

The design follows that of stringer but for block, it ends up as a four way pallet. Generally, block wooden pallets are stronger and more efficient to be handled than stringer pallets. Since the bottom bases for both designs face one direction, this becomes a slight hindrance when handling .Thus perimeter base pallets were developed so as to prevent this. Its design is the same as that of stringer and block, but the bottom boards are oriented in both directions so as to ease handling.

What Are Wooden Pallets? 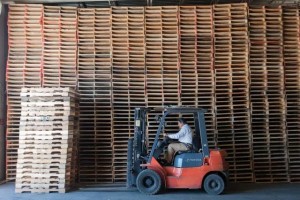